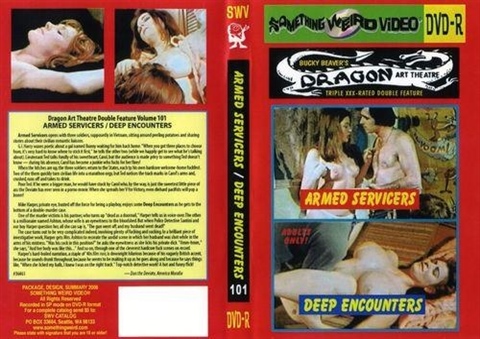 Country: USA
Director: Unknown
Cast: Maggie Williams, Unknown
Date: 1974
Description: Armed Servicers opens with three soldiers, supposedly in Vietnam, sitting around peeling potatoes and sharing stories about their civilian romantic liaisons.G.I. Harry waxes poetic about a gal named Bunny waiting for him back home. "When you got three places to choose from, it’s very hard to know where to stick it first," he tells the other two (while we happily get to see what he’s talking about). Lieutenant Ted talks fondly of his sweetheart, Carol, but the audience is made privy to something Ted doesn’t know – during his absence, Carol has become a junkie who fucks for her fixes!When the hitches are up, the three soldiers return to the States, each to his own hardcore welcome-home fuckfest. Two of the them quickly turn civilian life into a marathon orgy, but Ted notices the track marks in Carol’s arms and, crushed, runs off and takes to drink.Poor Ted. If he were a bigger man, he would have stuck by Carol who, by the way, is just the sweetest little piece of ass the Deviate has ever seen in a porno movie. When she spreads her V for Victory, even diehard pacifists will pop a boner!